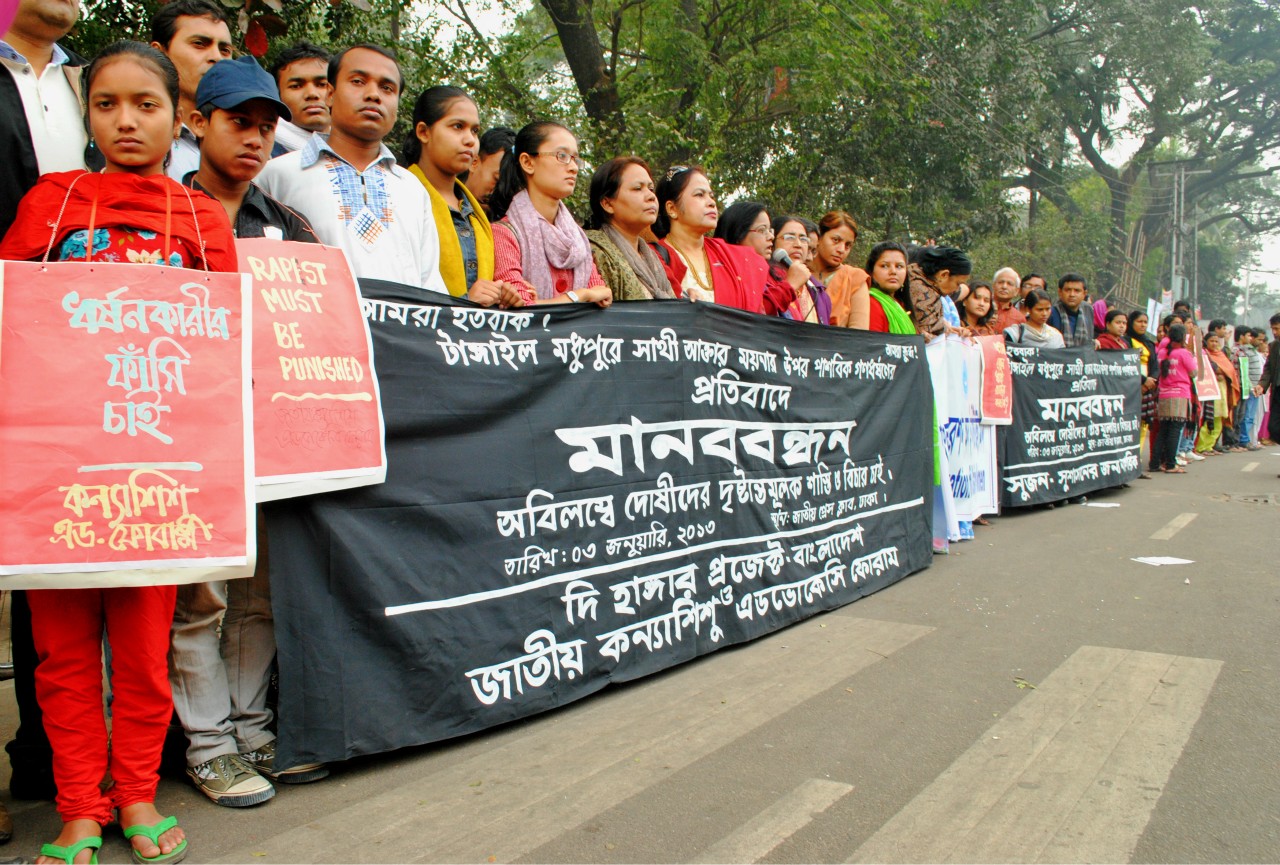 Human Chain on 3 January, 2013 in front of the National Press Clubraising voice to bring the rapists of a young girl child and their perpetrators to exemplary penalty. More than 400 representatives of 37 organizations, institutions and the civil society have participated in the assembly and expressed their revulsion against these rapscallions.

On 6 December, 2012, a15 year old school girl, SathiAkterMoyna, of Madhupur, Tangail, was handed over by another woman to a band of rapists, who captivated the helpless girl in a place and molested for4 consecutive days. The rapists also recorded the whole incident in video. The girl was then left unconscious on a rail track, from where she had been salvaged by the locals. The traumatized girl has been admitted to the One Stop Crisis Centre at Dhaka Medical College Hospital. Her condition is deteriorating day by day. She is now under intensive treatment with sedatives and psychiatric counseling.

On 14 December, the family of the girl was offered with a monetary compensation in a local arbitration. The family refused to accept the offer and filed a case in local Police Station on 30 December. Police has arrested the rapists and their abettor but surprisingly whoseemed to get bail. The Hunger Project and National Girl Child Advocacy Forum have organizeda protest in the court yard on 2 January, 2013, which then influenced the process to send them for remand.

In the Human Chain, NasimaAkhterJoly, Secretary, NGCAF, urged to the government to ensure exemplary penalty for the rapists. Country Director of The Hunger Project, Dr. BadiulAlamMajumdar mentioned rape as the most heinous act and asked the government to immediately proceed for the most appropriate punishmentfor these culprits. A no. of Civil Society representatives, including Prof. DilaraChowdhury, SelinaBanu from ASD, Adv. RashidaHaq of BNWLA, Aminul Islam Shujon from WBB, Prof. LatifaAkand, TazimaHossainMajumdar of THP, RehanaParvin from TMSS, AtikurRahman form Aparajeyo Bangladesh, Ms. Jonna from Bangladesh MohilaPArishad, Murshikul Islam Shimul from THP etc. have also shown their fraternity to the protest through their participation.