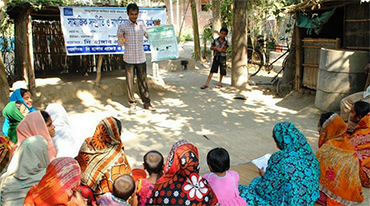 A new study, which includes research conducted in villages mobilized by The Hunger Project in Bangladesh in partnership with BRAC, shows the value of building strong communities, particularly among the lowest income groups. The study’s key finding is that low-income individuals who trust their communities make better long-term financial decisions that can lift them out of poverty.

The study, written by Jon M. Jachimowicz and Salah Chafik from Columbia University, Sabeth Munrat from BRAC, Jaideep C. Prabhu from the University of Cambridge and Elke U. Weber from Princeton University, was published last month in the Proceedings of the National Academy of Sciences.

Earlier research shows that people at the lowest income levels, making calculated decisions for a variety of reasons, ultimately favor immediate financial rewards over larger, but delayed payoffs. This makes it more difficult for individuals to escape poverty as they fail to engage in behaviors that benefit them in the long term such as investing in education, health and finance — creating a vicious cycle of poverty.

The study’s researchers therefore set out to test whether interventions that increase community trust can shift decisions toward the long term.

The study focuses on low-income communities in both the United States and Bangladesh. In Bangladesh, researchers worked with The Hunger Project and BRAC over two years to understand trust levels in low-income communities as the organizations engaged in their “low-cost and scalable method that builds community trust.” Researchers worked with 121 of Bangladesh’s local unions (the smallest rural administrative and local government unit) in four districts of Bangladesh (Kishoreganj, Habiganj, Sunamgonj, and Bagerhat). Sixty-one union parishads received the intervention and were compared to 60 neighboring union councils that were demographically similar but not participating in the program.

The Hunger Project-Bangladesh and the BRAC program researched in the study featured two main components:

The researchers found that strong community trust helps weave a net of support within communities, making it easier to approach fellow residents and family members requesting loans or support. By empowering residents to access public services and connect with local government, community volunteers contributed to higher trust levels within a community. Communities with no volunteers showed much lower levels of trust among their residents.

“Though not an outright evaluation of The Hunger Project’s work in Bangladesh, these findings have important lessons for The Hunger Project and others’ work to end hunger and poverty,” said The Hunger Project-Bangladesh Country Director and Global Vice President, Badiul Alam Majumdar. “This is also an academic recognition which is as good as it can get,” Majumdar further added.

The study makes a distinction between “generalized trust,” which extends to the social environment more generally, and “trust in one’s community.” Although generalized trust, per the authors’ studies and other research, affects people’s long-term decision making, it may be more difficult to change: it requires more time, intense exposure and systemic change. On the other hand, community trust involves people’s transactions and interactions with their immediate surroundings and has easier touch points for intervention.

The authors conclude that “policy should move beyond a sole focus on the low-income individual and instead provide additional emphasis on the low-income community. Policy makers could implement changes that give individuals in low-income communities more opportunities to develop community trust. This can be achieved, for example, by increasing the opportunities for interaction or giving community members more say over decision making at the local level. The poor may lack in material wealth relative to the rich, but they possess social wealth in the shape of their communities upon which they can draw. Building and boosting community trust can help decrease myopic decision making and, in turn, contribute to reducing the incidence of poverty domestically and worldwide.”

The Hunger Project has been active in communities throughout Bangladesh since 1990, and its worldwide work uses a gender-focused, community-led development approach that has three essential elements: empowering women as key change agents, mobilizing communities for self-reliant action and forging effective partnerships with government. “It is essential to invest in fostering strong local communities, with a voice in decisions and an effective partnership with their local government. This is how we will end hunger and poverty, once and for all,” said Majumdar.